UPDATE: ABC has started to rank above Just Dial (India’s premier yellow pages portal) for 2 of its most profitable keywords.

THE CHALLENGE – Rise of Competition and Shrinking Revenues

ABC is one of the pioneers in the Home Cleaning business based in a city in Southern India. They specialize in Home Cleaning, Home Sanitizing, Carpet, Sofa and Mattress Cleaning. With an increase in population in the city due to the growth of IT and ITES businesses, there has been an increase in pollution in the city. Owing to busier lifestyles and an increasingly NRI population, households do not get time to keep their houses clean and dust free. This has lead to increase in germs, allergens and other dust mites which cause allergy, cough and cold in households.

ABC has been in the business of Home Cleaning for nearly 4 years. ABC has been featured in media and has built a brand in its niche.

However, in the last 2 years, there has been an increase in competition for ABC with several competitors coming up and getting a share of the pie. With an already small market, having 4 competitors have resulted in reduced market size for ABC. This has led to reduced revenue and profits for ABC and its market penetration is shrinking. ABC spends on Adwords everyday to the tune of few hundred Indian rupees to acquire new customers.

ABC wanted to outdo its competition and grow its customer base by increasing its online presence. On an average over 40-50 people search for Home Cleaning based services every day in the city. ABC manages to attract about 5 visitors per day. As ABC ranks low in Google as compared to its competitors, a huge chunk of customers who are looking for ABC’s services are going away to ABC’s competitors who are ranking higher.

RankHigher.in worked on establishing ABC’s presence by helping it climb up Google Rankings. RankHigher.in realised that if ABC’s website started coming up in top 2-3 position for its most profitable keywords, ABC can grow its customer base by over 100%.

RankHigher.in established a 3 month plan to achieve its target. It listed out the 15 keywords and filtered out top 5 keywords for ABC which will help get the maximum number of visitors. Once the top 5 keywords were listed out, RankHigher.in researched, analysed and calculated the level of competiton and the strength of the competiton. RankHigher.in developed a comprehensive On-Page and Off-Page SEO approach targeted at local customers.

With a combination of Keyword Research, Website Optimisation, Content Generation, Performance Optimisation and Link Building targeted using the most profitable keywords, ABC started to come up in Google Rankings.

RankHigher.in developed a 3 month SEO strategy based on the following:
- Thoroughly understanding competitors and their SEO strategies
- Understanding where the gaps exist between the client’s present SEO and its competitors’ SEO
- Plugging in the gaps between the client’s SEO and competitor’s SEO
- Focusing on the “Local” element of the website. Target Keywords that emphasize the Local nature of Business
- Creating a strong optimized presence in Google + local
- Creating an information rich site that commands authority in the “eyes” of Google Search engine

ABC is ranking in top #2 for most of its top keywords and in top 10 (first page) for almost all of its keywords (about 10-15 keywords). All of its competitors in its niche rank below ABC in Google Search Results. 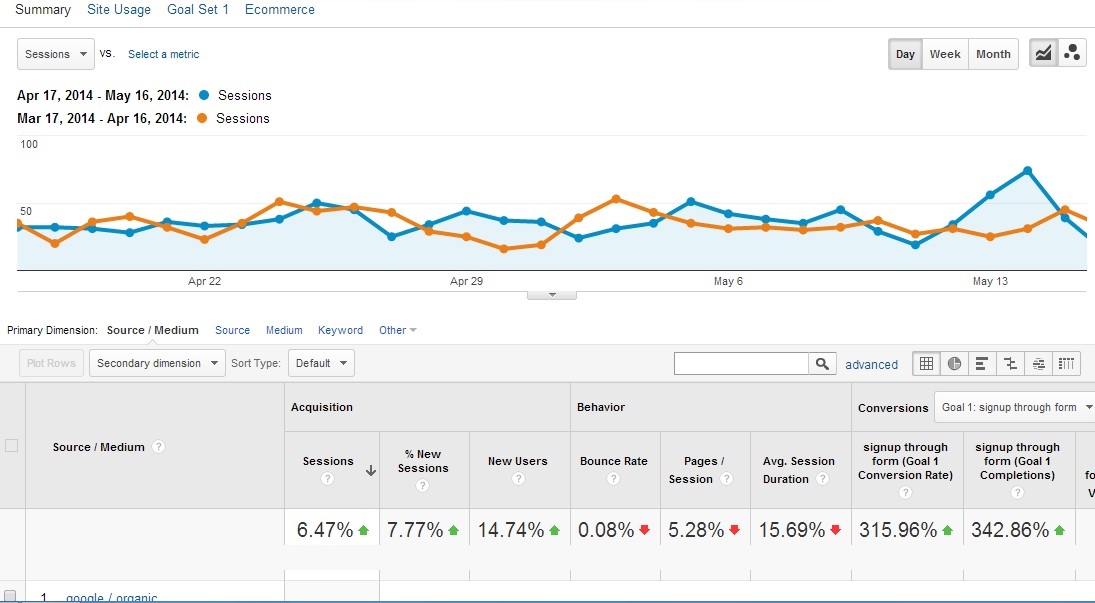 As seen from the Analytics, New Users percentage has increased 14.74%. The goal conversion rate has grown by over 300% over 1 month period.

“The work done by Raunak and RankHigher Team has been exemplary. We started getting positive improvements with a few days of engagement . Not only were the results visible and actionable , the constant innovation introduced over the period of engagement helped us get results way beyond the brief of the project. Add to it the infectious and professional approach to the work, prompt client servicing and very hands on approach. We did try talking to SEO experts earlier but this engagement has been an eye opener and we wish the team all the success in this venture. Thanks for the good work” – Nishant Prasad, Founder

To know more about how RankHigher

To know more about how RankHigher.in can help you acquire more customers for your business and rank high in Google Search, please do get in touch with us at helloteam@rankhigher.in or call +91-90-08-63-96-90

Not finding what you wanted?